The 5 facts about Silverback gorillas are about their size, strength, height, diet and location. 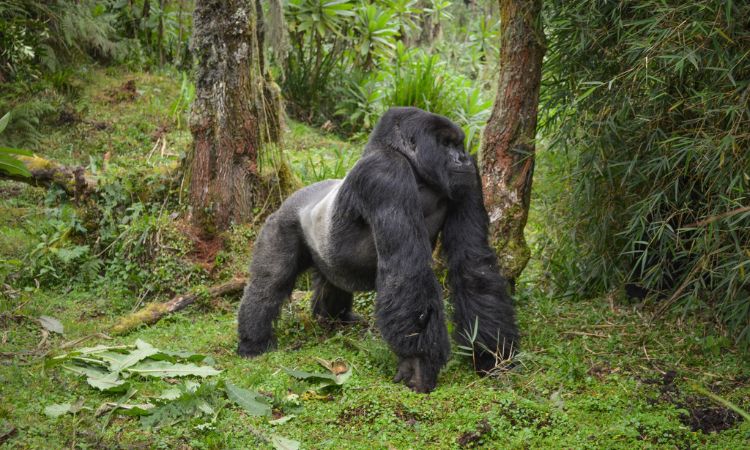 Regardless of sub-species, a mature male gorilla is known as a silverback and we shall discover why it was named so. When a male gorilla reaches maturity, it develops a silver-grey patch of hair on its back and shoulders, reaching to the hills.

A male gorilla between the juvenile and mature stage of growth is known as a “blackback”. Besides the silver-grey patch on its back, a mature male gorilla can be distinguished by its massive body size as well as larger head compared to the females.

At what Age is a male gorilla considered a Silverback?

So many things change in the gorilla family when males mature and one of them is the desire to head families. 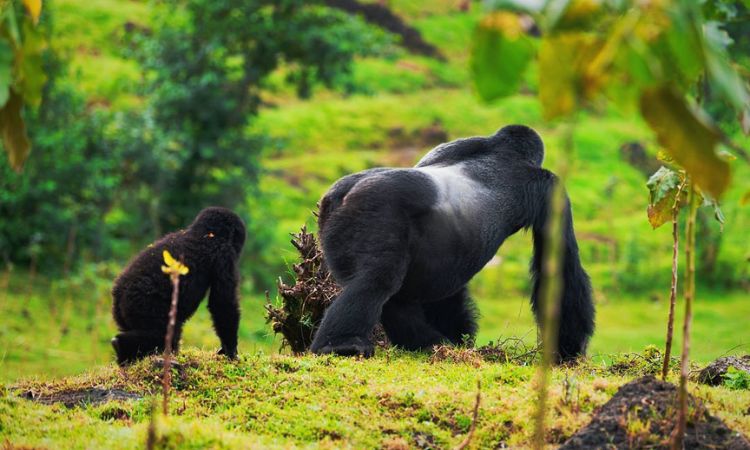 In most cases, a gorilla family has one dominant silverback (the head of the family) alongside other subordinate silverback gorillas (sometimes even none), adult females, juveniles, blackbacks, and infants.

The leader is usually the oldest or strongest silverback in the gorilla family. Subordinate silverbacks provide backup protection in gorilla groups.

Being the dominant silverback comes with privileges and challenges.

He has the sole privilege of mating mature females and siring offspring in the family as well.

He is given the respect he deserves especially when it comes to feeding first and when it comes to making decisions (like where to sleep and forage), it is the responsibility of the dominant silverback.

However, being the leader comes with a lot of sacrifices that include protecting the gorilla family, even if it requires getting injured and (worst case scenario) losing his life.

Also, his leadership is contested (in a case where there is more than one silverback in the family) and in such scenarios, subordinate silverbacks either overthrow the leader or grab several females to form new gorilla groups.

Sometimes, silverback gorillas willingly and peacefully leave natal groups to establish their own families without a flight and attract several emigrating females to join them.

In families with single silverback gorilla, in the event that the dominant silverback dies, other members (females and infants) will leave and find new groups because they won’t have anyone to guide and protect them.

In circumstances where a group doesn’t have a leader, the young ones always become victims of infanticide, especially resulting from unhabituated/lone silverbacks, predators like leopards, and poachers.

Therefore, female gorillas will join other groups to protect the infants, although there have been cases of families staying together until another silverback joins the group. 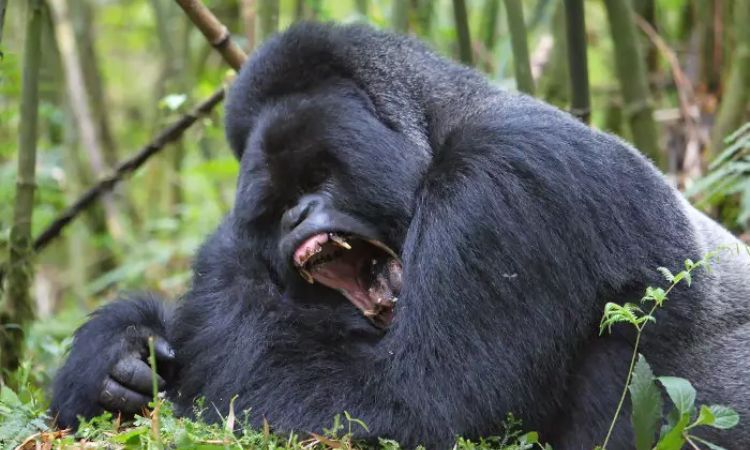 Silverback gorillas are also characterized by large canine teeth, which are very significant for biting enemies during fights.

See the tips for Photographing Silverback Gorillas in their natural habitat.

The Silverback gorilla’s body weight is commensurate to the quantity of food it consumes, whereby it is capable of consuming up to 30 kilograms of food in a single day.

Its diet mainly comprises of succulent leaves, roots, flowers, fruits, bamboo shoots, tree barks, stems, and sometimes termites and ants to supplement its diet. Silverback gorillas rarely drink water because they can find it on succulent leaves or morning dew.

Where to see Silverback Gorillas in Africa?

Silverbacks (of different gorilla sub-species) can be seen in the dense rainforests of Africa.

Our gorilla tours make it possible for travelers to track mountain gorilla groups in Uganda and Rwanda. For Uganda, visitors can see silverback gorillas within one of the 20 habituated gorilla families in Bwindi Impenetrable and Mgahinga Gorilla National Parks.

All you need is to be physically fit, be of age (15 years and above) and possess a gorilla permit which All Uganda Safaris can book as part of your gorilla safari.

Silverback gorillas can also be seen within any of the 12 habituated gorilla families in Rwanda’s Volcanoes National Park. We also book gorilla tours to the land of a thousand hills and only 96 gorilla permits are issued by Rwanda Development Board each day.

Explore the Pearl of Africa with our12 Days Uganda Safari Adventure packed with exciting tour activities. This safari is available on both budget and luxury travel plan and… View Tour

This trip from Kigali introduces you into the misty Bwindi Impenetrable National Park to enjoy a lifetime mountain gorilla trekking experience. The short Uganda… View Tour

This takes you to view the big five of African continent on top of chimp & gorilla trekking and other adventurous activities such as Game drives, boat cruise, nature… View Tour

How strong are Silverback Gorillas?

A Silverback Gorilla strength to mass ratio is about 10 where that of a man is 1.25. Compared to human beings, silverback gorillas are just as strong as 20 male adults.

Why do Silverback Gorillas Fight?

The main cause of fighting between silverbacks is power. Usually, the younger silverback gorillas challenge the older one in order to take leadership of the family.

Silverback gorilla fighting can at times be so rude that one silverback is killed. Some silverbacks are just defeated and stay in a group while others run away with some female gorillas.

How much do Silverback Gorillas Weigh?

Generally, all gorilla species are endangered. Silverback gorillas are leaders and protectors of the group. This means they have to encounter any treat against their group hence more vulnerable. The main threat to their survival is the humans, those that encroach on their habitat and the poachers.

How long do Silverback Gorillas live?

Silverback gorillas can live up to 40 years while in their natural habitat.

There is though a western lowland gorilla, Fatou that lived up to 65 years of age in Berlin Zoo in Germany.

What do Silverback Gorillas eat?

Silverback Gorilla diet is mainly vegetarian diet, feeding on stems, bamboo shoots, fruits and sometimes ants and termites are part of their diet.

Where do Silverback Gorillas live?

Where did the name “silverback” comes from?

The name comes from the grey/silver hair on their gorillas’ back. This is due to the genetic mutation called. silver coat color